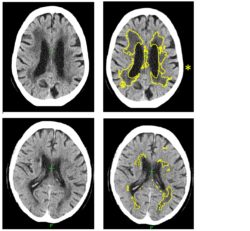 Machine learning has detected one of the commonest causes of dementia and stroke, in the most widely used form of brain scan (CT), more accurately than current methods.

New software, created by scientists at Imperial College London and the University of Edinburgh, has been able to identify and measure the severity of small vessel disease, one of the commonest causes of stroke and dementia.   The study, published in Radiology, took place at Charing Cross Hospital, part of Imperial College Healthcare NHS Trust.

Researchers say that this technology can help clinicians to administer the best treatment to patients more quickly in emergency settings – and predict a person’s likelihood of developing dementia. The development may also pave the way for more personalised medicine.

“This is the first time that machine learning methods have been able to accurately measure a marker of small vessel disease in patients presenting with stroke or memory impairment who undergo CT scanning. Our technique is consistent and achieves high accuracy relative to an MRI scan – the current gold standard technique for diagnosis.  This could lead to better treatments and care for patients in everyday practice.”

Professor Joanna Wardlaw, Head of Neuroimaging Sciences at the University of Edinburgh, added: “This is a first step in making a scan reading tool that could be useful in mining large routine scan datasets and, after more testing, might aid patient assessment at hospital admission with stroke.”

Small vessel disease (SVD) is a very common neurological disease in older people that reduces blood flow to the deep white matter connections of the brain, damaging and eventually killing the brain cells.  It causes stroke and dementia as well as mood disturbance.  SVD increases with age but is accelerated by hypertension and diabetes.

At the moment, doctors diagnose SVD by looking for changes to white matter in the brain during MRI or CT scans. However, this relies on a doctor gauging from the scan how far the disease has spread. In CT scans it is often difficult to decide where the edges of the SVD are, making it difficult to estimate the severity of the disease, explains Dr Bentley.

Although MRI can detect and measure SVD more sensitively it is not the most common method used due to scanner availability, and suitability for emergency or older patients.

Dr Bentley added: “Current methods to diagnose the disease through CT or MRI scans can be effective, but it can be difficult for doctors to diagnose the severity of the disease by the human eye.   The importance of our new method is that it allows for precise and automated measurement of the disease.  This also has applications for widespread diagnosis and monitoring of dementia, as well as for emergency decision-making in stroke.”

Dr Bentley explains that this software could help influence doctors decision-making in emergency neurological conditions and lead to more personalised medicine. For example, in stroke, treatments such as ‘clot busting medications’ can be quickly administered to unblock an artery. However, these treatments can be hazardous by causing bleeding, which becomes more likely as the amount of SVD increases. The software could be applied in future to estimate the likely risk of haemorrhage in patients and doctors can decide on a personal basis, along with other factors, whether to treat or not with clot busters.

He also suggests that the software can help quantify the likelihood of patients developing dementia or immobility, due to slowly progressive SVD. This would alert doctors to potentially reversible causes such as high blood pressure or diabetes.

The study used historical data of 1082 CT scans of stroke patients across 70 hospitals in the UK between 2000-2014, including cases from the Third International Stroke Trial. The software identified and measured a marker of SVD, and then gave a score indicating how severe the disease was ranging from mild to severe.  The researchers then compared the results to a panel of expert doctors who estimated SVD severity from the same scans. The level of agreement of the software with the experts was as good as agreements between one expert with another.

Additionally, in 60 cases they obtained MRI and CT in the same subjects, and used the MRI to estimate the exact amount of SVD.  This showed that the software is 85 per cent accurate at predicting how severe SVD is.

January 15, 2020 Lack of key protein reduces brain connections in schizophrenia
January 6, 2020 Grow your own blood vessel model in a dish
October 23, 2019 Trial will look at new Parkinson’s treatment for frequent falls Imperial researchers have been awarded funding to trial a new treatment for frequent falls in patients with advanced Parkinson’s. In Parkinson’s disease, some parts of the brain begin to deteriorate, leading to symptoms including balance problems, which can increase the chances of falls. A team from Imperial College London and Imperial College Healthcare NHS Trust […]