Trial will look at new Parkinson’s treatment for frequent falls 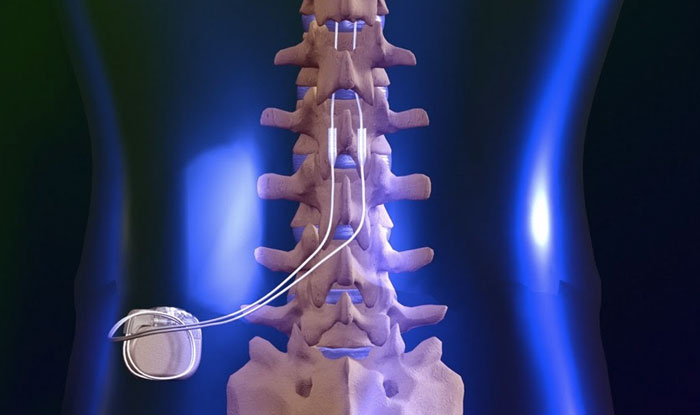 Imperial researchers have been awarded funding to trial a new treatment for frequent falls in patients with advanced Parkinson’s.

In Parkinson’s disease, some parts of the brain begin to deteriorate, leading to symptoms including balance problems, which can increase the chances of falls.

A team from Imperial College London and Imperial College Healthcare NHS Trust have been awarded £250,000 from the Medical Research Council (MRC) to trial a surgical implant that alters nerve activity, which could improve movement and reduce the number of falls.

The Spinal Cord Stimulation device works by sending a low-voltage electrical current to different areas of the spinal cord and it is already used to treat people with chronic back and nerve pain. Previous studies in mice have shown that it could be used to treat Parkinson’s patients.

The team will recruit five patients with advanced Parkinson’s for the trial which will take place at Charing Cross Hospital, part of Imperial College Healthcare NHS Trust, from November.

Dr Yen Tai, from the Department of Brain Sciences at Imperial College London, and Consultant Neurologist at Imperial College Healthcare NHS Trust, is one of the researchers leading the trial. He said: “Frequent falls are a common and disabling problem in advanced Parkinson’s, and can lead to patient’s being housebound. They can also lead to serious complications like hip fractures requiring hospital admission.  Falls can also impact patients’ physical and mental wellbeing as they have to make adjustments to their lives to try and prevent them.  Although there has been progress in finding treatments that can control the condition, more needs to be done to find new ways to help patients with advanced Parkinson’s so they can lead a better quality of life.  This grant will enable me to work in collaboration with the Brain and Vestibular Group at the College and the Trust, to trial a new treatment that could help improve outcomes for patients and how we deliver care.”

Dr Barry Seemungal, Honorary Clinical Senior Lecturer from the Department of Brain Sciences and Consultant Neurologist at Imperial College Healthcare NHS Trust added: “As the population of the UK ages and increase, more people will be diagnosed with Parkinson’s in their lifetime.  Many will experience frequent falls and we need to be developing more effective treatments to tackle this growing problem.

The MRC grant will allow us to explore spinal cord simulation as an alternative treatment for frequent falls and could lead to new advances in how we tackle the symptoms of Parkinson’s. Importantly, conditions such as Alzheimer’s are also affected by falls so we hope that this study will benefit other forms of brain diseases where falls can worsen patients’ quality of life.”

Current treatments such as dopamine drugs and an invasive surgical procedure called deep brain stimulation, which involves implanting electrodes deep into the brain, are effective in improving tremor and slow movement in the limbs.  However, they are generally ineffective in reducing falls in Parkinson’s patients.

During the study, patients will either receive spinal cord stimulation or placebo. They will be monitored for a year following the treatment to see if there is an improvement in their balance and a reduction in the number of falls they have. The researchers will also carry out tests to measure brain wave activities following surgery to see if spinal cord stimulation changes brain function.

If successful, the team hope that this treatment could be used to treat patients with advanced Parkinson’s. They also hope that the trial will help them to select the patients most likely to benefit from the treatment.

Patients will be treated at the Balance and Neurodegeneration clinic at Charing Cross Hospital, a new specialist clinic set up by Drs Seemungal and Tai to treat patients with neurodegenerative diseases who may have balance and spatial orientation problems.

Professor Dipankar Nandi, Professor of Practice (Neurosurgery) at the College and Consultant Neurosurgeon at Imperial College Healthcare NHS Trust, will also work with Dr Seemungal and Dr Tai on the project.

Patients suitable for this study have already been identified for the upcoming trial. For more information please visit Dr Barry Seemungal’s and Dr Tai’s web pages