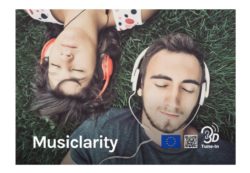 A collection of apps and video games that aims to improve the lives of those impacted by hearing loss has been awarded a prestigious healthcare award.

The toolkit has a range of functions, including improving the experience of listening to music through a hearing aid.

The award is a celebration of collaborative work between healthcare scientists, patients and their families to achieve shared goals. The annual ceremony took place in early March.

“Hearing loss can have a big impact on a person’s quality of life both physically and emotionally.  It is often referred to as the silent disability as it’s non-life threatening but can be linked to stress, depression and loneliness.  The treatments for hearing loss such as hearing aids have evolved over the last 30 years to make sounds, in particular speech, louder and clearer.”

Dr Picinali adds that those with hearing aids may be  unaware of the full benefits that their hearing aids can bring.  “We developed this toolkit, a collection of apps and videogames to help users, ranging from children to the elderly, to engage with their hearing aids and overcome challenges they face.  We are pleased with the recognition from NHS England and we will be working on rolling out the toolkit out across the NHS and beyond.”  The 3D Tune-In project comprises five digital games and apps, which aim to show users how they can optimise their hearing aids and address challenges they face in their day-to-day lives, such as communicating with others. For example, researchers developed the app Musiclarity to improve the experience of listening to music with a hearing aid.

The web-based app provides a database of pieces of music that can be tuned and adjusted to sound optimal for the user’s level of hearing loss.  To use the app, listeners remove their hearing aid and use a high quality pair of headphones or loudspeakers.  The app amplifies the sounds in order to compensate for the users specific hearing loss.

The app also displays the lyrics of the song being played as well as visual representations of the different instruments present in the music, allowing the listener to position each individual sound source in different locations around their heads.

Over 90 million people in Europe currently suffer from hearing loss and, due to an ageing population, this figure is set to increase.  The main treatment for individuals with permanent hearing loss is hearing aids, small electronic devices worn in the ear that make sounds louder and clearer.  However, the majority of users only use them to amplify sounds and do not take full advantage of the range of features that can allow them to hear better.

Maxine Myers caught up with Dr Picinali to talk more about the EU project, the feedback from users and the next steps.

The 3D Tune-In toolkit and apps were designed and developed by researchers at Imperial College London, the University of Malaga, Nottingham University De Montfort University, gaming developers and a large European hearing aid manufacturer.   They also worked in collaboration with the hearing communities and patients at Imperial College Healthcare NHS Trust and with other institutions across the UK, Spain and Italy.

The project was funded by the European Union’s Horizon 2020 research and innovation programme.

The 3D Tune-In project is an example of the research work carried out by Imperial College Academic Health Science Centre (AHSC), a joint initiative between Imperial College London and three NHS hospital trusts. It aims to transform healthcare by turning scientific discoveries into medical advances to benefit local, national and global populations in as fast a timeframe as possible.