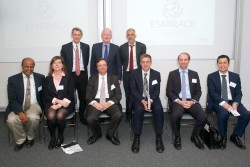 More multidisciplinary collaborations are needed to tackle the growing global threat of antimicrobial resistance, according to Imperial researchers.

Antimicrobial resistance (AMR) occurs when microorganisms are able to survive exposure to antimicrobial medicines such as antibiotics that would normally kill them or stop their growth.

Professor Alison Holmes, Director of the NIHR Health Protection Research Unit in Healthcare Associated Infection and Antimicrobial Resistance, was one of the presenters speaking at the inaugural EMBRACE conference, which took place recently at Imperial College London.

The aim of the conference was to facilitate multidisciplinary research collaborations to address the challenge of antimicrobial resistance (AMR), as well as discuss new and current ways of tackling the problem.

Professor Holmes said: “AMR is a growing global threat that must be addressed without delay.  We are now at a place where life threating infections such as tuberculosis are becoming difficult or even impossible to treat with current medicines.  We need to tackle this problem from all scientific and health fronts and this can only be achieved through multidisciplinary collaborations.  We need scientists, clinicians, industry and policymakers to work more closely together to come up with innovative solutions to solve AMR.  I hope the EMBRACE conference helped to facilitate stronger links between researchers both within the Imperial and beyond.”

Over 130 delegates from the College, Imperial College Healthcare NHS Trust, industry, veterinary medicine and other universities gathered at the event to discuss the growing challenges around AMR, and to network and identify potential multidisciplinary research collaborators.

Imperial’s President, Professor Alice Gast, welcomed guests to the event and Paul Ananth Tambyah, Professor of Medicine at the National University of Singapore, delivered the keynote speech on how technology has been used to control AMR in South East Asia.  Dr Victoria Marlow from the Engineering and Physical Sciences Research Council (EPSRC) emphasised the support for AMR research from the research councils and closing words were given by Professor James Stirling, Provost of Imperial College London.

The conference was also an opportunity to celebrate the winners of the recent EMBRACE pump-priming competition for AMR research projects. This competition aimed to enable principal investigators and other researchers across the College to embark on new areas of multi-disciplinary work in this field, with a view towards developing larger funding proposals.  Professor Zoltan Takats, from the Department of Surgery and Cancer at Imperial, was awarded funding from EMBRACE to look into diagnostic devices for the early detection of AMR.  Professor Ramon Villar, from the Department of Chemistry at Imperial, was awarded funding to look into genes associated with AMR.