New treatments and devices developed at iImperial could make a difference to the health of pregnant women and their babies, say speakers at an event. 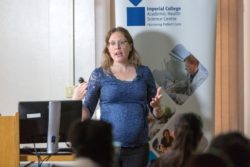 Dr Nowlan talked about her research on a new sensor to measure and monitor fetal movements in the womb.  The sensor uses sound waves to detect forceful movements the baby makes, such as kicks, as well as more general ones. The aim is to detect and treat joint conditions such as hip dysplasia at an earlier stage, as well as helping to prevent stillbirths. The sensor was developed in collaboration with clinicians at the Trust.

Dr Nowlan also discussed her work on how reduced and restricted fetal movements can increase the chances of skeletal abnormalities in babies such as arthrogryposis.  These conditions have life-long consequences and can lead to early onset of osteoarthritis, a type of arthritis.   Dr Nowlan and her team hope to use this information to address unmet clinical needs in the diagnosis, prevention and treatment of musculoskeletal conditions. 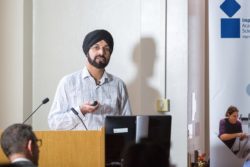 Professor Dhillo discussed his research on how he has used a natural hormone found in the body called kisspeptin to safely trigger ovulation in women who are at risk of experiencing complications during IVF treatment.   Using this method, Sixty three babies have been born after their mothers were given an injection of the natural hormone kisspeptin to make their eggs mature instead of the usual fertility drugs.

Doctors usually administer hormones such as hCG to mature eggs during IVF treatment, but this can carry the risk of ovarian hyperstimulation syndrome (OHSS), a potentially life-threatening condition.  Around one third of IVF patients experience OHSS in a mild form, causing symptoms such as nausea and vomiting. Less than 10 per cent of patients experience moderate or severe OHSS, which can cause kidney failure. Women with polycystic ovary syndrome (PCOS) are most likely to develop OHSS during their IVF cycle.

Kisspeptin is a naturally occurring hormone that stimulates the release of other reproductive hormones inside the body. Unlike hCG, which remains in the blood for a long time after an injection, kisspeptin is broken down more quickly, meaning the risk of overstimulation is lower.

Professor Dhillo hopes the treatment will be available within the next five years.

The seminar was the first of a new series designed to showcase the work of the AHSC, which aims to translate world-leading discovery science into new diagnostics, devices and therapies as quickly as possible, for the benefit of patients and populations worldwide.

The third event in the series, ‘new surgical innovations and tools’,  will take place on  Monday 29 January 2017 at St Mary’s Hospital in Paddington from 12.30.

This talk will be delivered by Professor Guang-Zhong Yang, Director and Co-founder of the Hamlyn Centre for Robotic Surgery at the College, and Professor the Lord Ara Darzi of Denham, Director of the Institute of Global Health Innovation and Consultant Surgeon at the Trust.

February 7, 2014 Health professionals urge MPs to ban smoking in cars with children
May 21, 2018 Breath test breakthrough for early diagnosis of oesophageal and gastric cancer A breath test can successfully detect oesophageal and gastric cancer and could be used as a first-line test for patients, say researchers. In a multi-centre clinical trial of 335 patients, the breath test can identify cancer from benign diseases with 85 per cent accuracy. Unlike other methods, the test is non-invasive.  The study was led […]
February 15, 2018 Imperial researchers to tackle a rare airway disorder and balance problems Two allied health professionals have been awarded prestigious research fellowships from the National Institute of Health Research. Gemma Clunie, Clinical Specialist Speech and Language Therapist at Imperial College Healthcare NHS Trust, and Rebecca Smith, Physiotherapist at Imperial College London, were awarded the NIHR Clinical Doctoral Research Fellowship (CDRF) to carry out studies about a rare airway […]