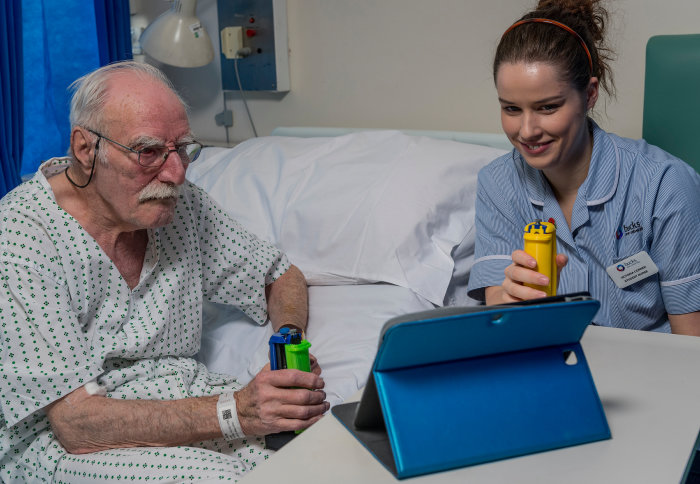 An Imperial researcher has been awarded funding to develop a multiplayer video game to improve rehabilitation outcomes of physically impaired patients.

Dr Paul Bentley, Clinical Senior Lecturer and Consultant Neurologist at Imperial College Healthcare NHS Trust, and his team have been awarded £1.1 million from the National Institute of Health Research’s (NIHR) translational funding scheme to build a web-based version of a social video game, called Balloon Buddies that could help patients with physical impairments improve their rehabilitation.

The team will also use the funding to put Balloon Buddies and other interactive arm-exercise games on the web to make the world’s first rehabilitation social gaming network.

Dr Bentley said: “Video games can play an integral role in aiding the recovery of patients with physical impairments alongside more traditional methods.  They can make physiotherapy more engaging, stimulating and motivate patients to carry out their exercises.  However, most are designed for users to play on their own which can leave some patients feeling isolated. Balloon Buddies is the first of its kind rehabilitation game which allows for real-time collaboration between players.  This type of interaction leads to better outcomes for patients.  I am pleased to be awarded the funding from the NIHR which will allow us to further develop the technology and help more patients.”

Balloon Buddies is a tool that enables those recovering from conditions such as a stroke to engage and play together with healthy volunteers such as therapists and family as a form of rehabilitation.

The researchers have shown that this type of collaboration makes it more rewarding for the less-abled partner, more challenging for the better partner, and overall more fun for both, as they have to continuously work together to score points.

In a previous trial, the team found that by increasing engagement with healthy volunteers, compared to playing alone, patients may be more likely to increase the effort they put into training, which could ultimately lead to greater gains in physical performance.

Balloon Buddies uses animation, sounds, and vibration-feedback, similar to conventional video games. It requires users to balance a ball on a beam, which is lifted at each of its ends by balloons controlled by the players.  The main aim of the game is for the players to vary the height of the beam so that the ball collides with moving targets in order to collect points.  Players are also required to work together to keep the beam horizontal so that the ball doesn’t roll off the platform.  It is played with a wireless handgrip called GripAble, enabling people with arm weakness to control video games on any standard tablet device.

The project represents a collaboration between Imperial College Human Robotics Group and Brain Sciences Departments; University of Southampton, and the startup GripAble Ltd.

June 20, 2022 Single brain scan can diagnose Alzheimer’s disease A single MRI scan of the brain could be enough to diagnose Alzheimer’s disease, according to new research by Imperial College London. The research uses machine learning technology to look at structural features within the brain, including in regions not previously associated with Alzheimer’s. The advantage of the technique is its simplicity and the fact […]
April 12, 2022 Imperial medical technology spinout raises $11 million An imperial spinout company behind a digital therapy and rehabilitation platform has secured $11 million of investment funding. GripAble, formed by researchers at Imperial College London and clinicians at Imperial College Healthcare NHS Trust, is a digital assessment and training platform supporting individuals undergoing rehabilitation for both neurological and musculoskeletal conditions. With a focus on hand and […]
March 10, 2022 Imperial awarded £11.3 million for early stage clinical research Imperial has been awarded £11.3 million by the National Institute of Health Research (NIHR) to support the delivery of clinical research. The funding is for the NIHR Clinical Research Facility (CRF), a partnership between Imperial College London and Imperial College Healthcare NHS Trust.  The facility offers a dedicated and purpose-built space in Hammersmith Hospital where […]