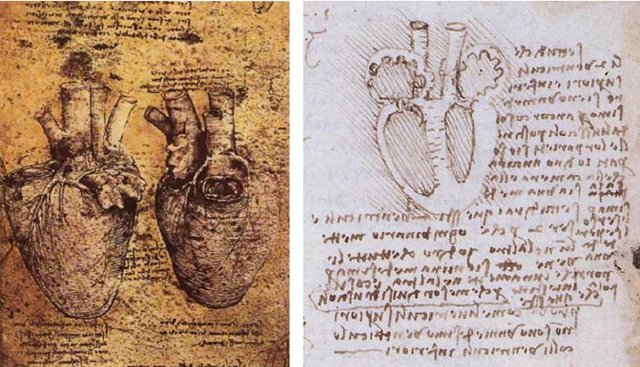 Structures first sketched by artist Leonardo da Vinci are crucial in understanding how the heart works, according to researchers.

The study, led by researchers from the Medical Research Council (MRC) London Institute of Medical Sciences at Imperial College London, is the first to show how a complex mesh of muscle fibres that line the inner surface of the heart play a vital role in its function by increasing the efficiency of blood flow through the organ.

The team hopes the findings, published in the journal Nature, could help to identify those most at risk of heart failure, one of the leading causes of death worldwide, and inform research into new treatments for the disease.

Dr Declan O’Regan from the MRC London Institute of Medical Sciences, Director for Imaging Research at Imperial College Healthcare NHS Trust and lead author of the study, said: “Leonardo da Vinci sketched these intricate muscles inside the heart half a millennium ago, and it is only now that we are beginning to understand how important they are to human health.

“Da Vinci was also intrigued by the link between maths and nature, so it’s fitting that we found that fractal patterns in the heart are so important for its function. This work offers an exciting new direction for understanding the heart and shows the potential for bringing together ideas in maths and biology to medical research.

The team used artificial intelligence (AI) to analyse 25,000 MRI scans of patients’ hearts from the UK Biobank study (from 2014-2020.   An additional 1,129 healthy volunteers hearts were scanned at Imperial College Healthcare NHS Trust and 510 patients with dilated cardiomyopathy- a condition in which the heart becomes enlarged and cannot pump blood effectively- at Royal Brompton Hospital.

The scans showed the intricate structure of these muscle fibre,  which are called trabeculae.  The team wanted to investigate further their role in heart function.

The findings show how the trabeculae muscles form a repeating geometric pattern known as a fractal, which is seen in other structures from trees to snowflakes.   Da Vinci was the first to sketch these muscles in the 16th Century, speculating at the time that they warm the blood as it flows through the heart, however their true importance has not been recognised until now.

The researchers found how this network of muscle fibres, that cover the internal surface of the heart’s chambers, are critical to the performance of the heart. The researchers suggests that these fibres allow blood to flow more efficiently during each heartbeat, in a similar way to how dimples on a golf ball help it to travel further through the air.

The team discovered six regions in DNA that affect how the fractal patterns in these muscle fibres develop. The researchers also found two of these genes also regulate branching of nerve cells, suggesting a similar mechanism at work in the developing brain as well as the heart.

The researchers found that trabeculae may influence the risk of heart disease. Using genetics to analyse data from 50,000 patients  they found that different fractal patterns in these muscles affected the risk of developing heart failure. It is hoped this will enable future research on the disease, which affects around 920,000 people in the UK.

Dr O’Regan said: “This network of muscles lies between fast-flowing blood inside the heart and the contracting heart muscle. The next steps for our research are to understand how these fibres affect the ‘aerodynamics’ of blood flow in the heart and how this might inform research into new treatments for heart disease.

“We also found that these fibres influence how fast electrical impulses travel through the heart – so they may be important for more than one aspect of how the heart works.”

Dr Hannah Meyer, who collaborated with Dr O’Regan on the study from the Cold Spring Harbor Laboratory in the US, added: “Our work significantly advanced our understanding of the importance of myocardial trabeculae. But perhaps even more importantly, we also showed the value of a truly multi-disciplinary team of researchers.

“Only the combination of quantitative genetics, clinical research and bioengineering led us to discover the unexpected role of myocardial trabeculae in the function of the adult heart.”

The researchers will carry out more research on these muscles inside the heart, with the hope this could lead to new directions for understanding how common heart diseases develop and how they are treated.

August 28, 2020 Age no criterion for decisions on heart attack treatment, new research finds Elderly patients suffering the most common type of heart attack may benefit from more invasive treatment, new research has shown. The study, published in The Lancet, draws on data captured over seven years from 1500 patients aged 80 or over. It was conducted by researchers from the National Institute of Health Research Health Informatics Collaborative (NIHR-HIC), […]
April 20, 2020 Protein can identify heart patients at increased risk of death
April 15, 2020 Imperial welcomes world-leading health, research and education designation Imperial College Academic Health Science Centre has been redesignated an AHSC for a further five years. The prestigious designation from the National Institute of Health Research and NHS England/Improvement recognises Imperial College AHSC as a centre of excellence in health research, education and patient care. The Imperial College AHSC is a University-NHS partnership that aims to accelerate the translation of scientific breakthroughs into […]