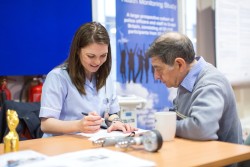 Pioneering clinical and health research projects were showcased at a special public event this week.

More than 150 visitors attended the Health Research Matters event on Monday at Hammersmith Hospital, part of Imperial College Healthcare NHS Trust.  The event was a celebration of research funded by NIHR Imperial Biomedical Research Centre (BRC) over the last nine years, which have helped improve the health outcomes of patients and the public.

The BRC is a research partnership between Imperial College London and Imperial College Healthcare NHS Trust (ICHT), which aims to improve patient healthcare by translating the findings of innovative research in biomedicine into NHS practice.

At the event, guests were able to view a range of interactive demonstrations and exhibits of research carried out by researchers at the College and clinicians at the Trust.

For example, a team led by Gary Frost, Professor of Nutrition and Dietetics at Imperial College London, has developed an ingredient that can be added to food to make it more filling. The team was on hand to talk visitors through the science behind the ingredient, which can help tackle obesity.

The ingredient, called inulinpropionate esther (IPE) stimulates the gut to release hormones that act on the brain to reduce hunger. The team’s studies in volunteers have shown that adding IPE to the diet prevents weight gain over a six month period.  The team is now working with a number of industry partners to create food products that contain IPE.

Visitors also saw a demonstration on a new fertility treatment that could make IVF safer for mothers. Waljit Dhillo, Professor in Endocrinology & Metabolism at Imperial College London, identified that the natural hormone kisspeptin can be used to stimulate ovulation in women at risk of experiencing complications during IVF treatment. The hormone offers an alternative for women for whom standard fertility drugs can cause Ovarian Hyperstimulation Syndrome (OHSS), a potentially life-threatening condition. More than 30 babies have been born in a trial at Imperial College Healthcare NHS Trust led by Professor Dhillo, where women were given kisspeptin to make their eggs mature instead of the usual fertility drugs. 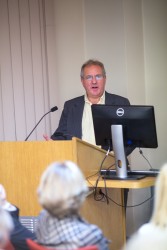 “Since its creation in 2007, the BRC has been instrumental in supporting pioneering research studies at the College and the Trust that have made a difference to the health of patients and populations in the UK and beyond.  The funding provided by the BRC has helped translate lab-based discoveries into new leading edge treatments, technologies, diagnostics and other interventions in clinical settings.   Our event was a celebration of the work of the BRC and it enabled researchers and clinicians to further engage with our patients and the public, and to demonstrate the benefits of taking part in research.   I look forward to the BRC supporting and funding even more innovative research in the future.”

At the event, visitors had the opportunity to view the facilities of the Imperial Clinical Research Facility, which provides dedicated space and expertise for early-stage clinical trials and other experimental medicine research projects.  They could also tour the Imperial Clinical Imaging Facility, which provides equipment such as MRI and PET scanners for neuroscience research and oncology.

Visitors were also invited to take part in a discussion panel chaired by Professor Helen Ward, Director of the Patient Experience Research Centre at Imperial, on how research can be enhanced through patient and public involvement.  There was a second panel discussion on the ways patients can get involved in research, which was chaired by Jess Henderson, Innovation Delivery Lead at Imperial College Healthcare Partners.