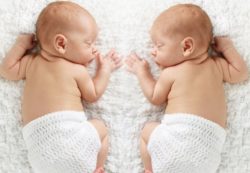 Imperial has been awarded £2.2 million grant to trial a new treatment for a potentially deadly complication that affects some twin pregnancies.

Dr Christoph Lees, Head of Fetal Medicine at Imperial College Healthcare NHS Trust and Clinical Reader in Obstetrics at Imperial College London, was awarded the funding from the Medical Research Council (MRC) to carry out the first in human trials to treat twin-twin transfusion (TTTS).

TTTS is a condition that affects 10 to 15 per cent of identical twins pregnancies that share a placenta.  It occurs when there is an imbalance in the placental blood vessels that connect both twins. If the blood doesn’t flow evenly between the twins, one gets more blood, called the recipient twin, while the other gets less blood, the donor twin.

The uneven blood flow results in the recipient twin growing too big, due to the extra nutrients and fluid the baby receives, and the donor twin growing too slowly.  This affects the twins’ growth, and can result in complications such as premature birth, handicap or even death of one or both babies.

Severe cases can be treated by using a laser to destroy the abnormal blood vessels, so that each baby has a separate supply of oxygen and nutrients.  However, this involves making a small hole in the womb and carries a risk of infection or miscarriage.

Dr Christoph Lees, said: “TTTS is a rare but life threatening condition that can have a devastating impact on families.  Each year around 300 babies die as a result of TTTS and there is a need to develop more effective treatments.  In our previous research findings we have shown that High Energy Focused Ultrasound (HIFU) can be used to block blood flow in small placental vessels. If we could do this non-invasively using HIFU in TTTS we could reduce the chance of complications that are associated with current treatments.  Our MRC grant will allow us to translate our research findings into humans, potentially delivering better outcomes for patients.”

Dr Lees and his team will see whether High Energy Focused Ultrasound (HIFU) can be used to selectively target and destroy placental blood vessels – potentially enabling it to split the placenta in two without the need for an invasive procedure. The technique creates a beam of high-energy sound waves that generate heat, and kill cells. It is already used to treat prostate cancer and fibroids.

In a previous study involving sheep, the team were able to show that the technique was successful, and could destroy blood vessels without damage to the fetus. It was conducted by researchers from Imperial and the University of Cambridge, with technology being developed at The Institute of Cancer Research, London.

The team suggests that the non-invasive technique could potentially be performed at an earlier stage in the pregnancy, which could further reduce chance of complications.

The grant will be used to recruit 13 patients throughout the UK for the clinical trial, which will take place at Queen Charlotte’s and Chelsea Hospital, part of Imperial College Healthcare NHS Trust.  The trials are due to start in 2018.

The clinical trial is an example of the work carried out by the Academic Health Science Centre (AHSC), a joint initiative between Imperial College London and three NHS hospital trusts. It aims to transform healthcare by turning scientific discoveries into medical advances to benefit local, national and global populations in as fast a timeframe as possible.

For more information about Twin-Twin Transfusion Syndrome The Twin and Multiple Birth Association has information available.

They also have Twinline – a free helpline service for anybody that is involved with the care of multiples. Twinline is open every day from 10am to 1pm and from 7pm to 10pm on 0800 138 0509 (Freephone)