A simple device can improve the ability of patients with arm disability to play physiotherapy-like computer games, according to new research.

The low-cost invention, called gripAble™, consists of a lightweight electronic handgrip, which interacts wirelessly with a standard PC tablet to enable the user to play arm-training games. To use it, patients squeeze, turn or lift the handgrip, and it vibrates in response to their performance whilst playing. The device uses a novel mechanism, which can detect the tiny flicker movements of severely paralysed patients and channel them into controlling a computer game.

Special-training computer games, controlled by the device, have been designed for people with no previous experience of using computers. For example one computer game requires the user to squeeze repeatedly to slowly reveal a photograph. 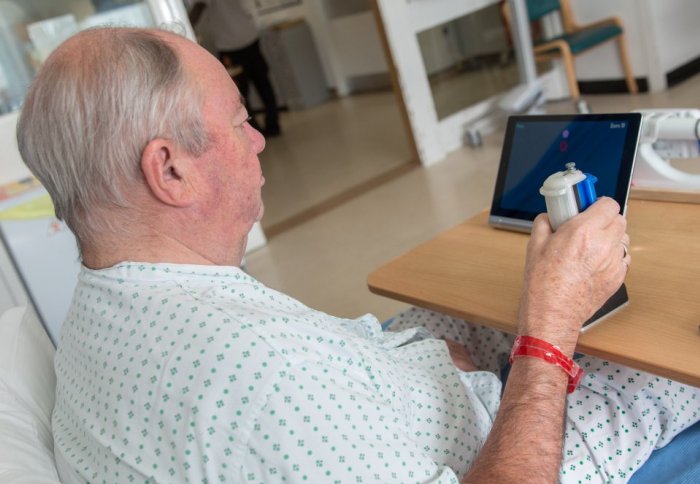 In a new study published in PLOS ONE, researchers from Imperial College London have shown that using the device increased the proportion of paralysed stroke patients able to direct movements on a tablet screen by 50 per cent compared to standard methods. In addition, the device enabled more than half of the severely disabled patients in the study to engage with arm-training software, whereas none of the patients were able to use conventional control methods such as swiping and tapping on tablets and smartphones.

Over five million people in the UK live with arm weakness – approximately one million of them following a stroke, plus others who have neurological and musculoskeletal conditions. Arm weakness contributes to physical disability that requires expensive long-term care. For example, treatment for stroke costs the NHS £9 billion a year, which is five per cent of the total NHS budget. The only intervention shown to improve arm function is repetitive, task-specific exercise but this is limited by the cost and availability of physiotherapists.

The gripAble™ device is designed for patients to use unsupervised in hospital and at home. The research tested the gripAble™ device with stroke patients who had suffered successive strokes with arm paralysis at Imperial College Healthcare NHS Trust over six months. The researchers assessed their ability to use gripAble™ to control mobile gaming devices such as tablets that could be used for rehabilitation and compared this to their use of conventional methods such as swiping and tapping.

The success of the device was most apparent for patients with severe arm weakness: no patients in this group were able to use conventional controls to play training games, whereas 58% could use gripAble™.

In a smaller sub-group the trial also demonstrated that severely disabled patients could play computer games that involve tracking a target with almost as good accuracy as healthy people.

The clinical trial was carried out at Charing Cross Hospital, part of Imperial College Healthcare Trust, between 2014 and 2015. The team is now carrying out a feasibility study in North West London to test the use of the device in patients’ homes.

We have developed the gripAble™ device to improve arm and cognitive function of patients who have mild to severe arm weaknesses. Unlike other therapies currently on the NHS, gripAble™ is a low cost device which can be used in hospitals and independently by patients at home. As such it could potentially help save the health service millions of pounds.

The potential of gripAble™ as a means of delivering cost-effective physiotherapy was recognised by a NHS England Innovation Challenge Prize in early 2016.

Lead researcher Dr Paul Bentley, who is a Clinical Senior Lecturer at Imperial College London and Honorary Consultant Neurologist at Imperial College Healthcare NHS Trust , said: “In the UK 100,000 new cases of arm weaknesses are diagnosed each year following a stroke. Often this impairs people’s ability to carry out daily activities, requiring long-term care. The use of mobile-gaming could provide a cost-effective and easily available means to improve the arm movements of stroke patients but in order to be effective patients of all levels of disability should be able to access it.

“We have developed the gripAble™ device to improve arm and cognitive function of patients who have mild to severe arm weaknesses. Unlike other therapies currently on the NHS, gripAble™ is a low cost device which can be used in hospitals and independently by patients at home. As such it could potentially help save the health service millions of pounds. We now intend to further develop the device so we can help more patients who are currently suffering from the effects of poor arm and upper body mobility.”

The researchers collaborated with Human Robotics Group at Imperial College London to develop the device. The research is funded by the Imperial Confidence in Concept Award, the NHS England Innovation Challenge Prize, and the EU 7th Framework Programme for Research and Technological Development grants.

The gripAble™ device is an example of the work of the Imperial Academic Health Science Centre (AHSC).  This is a partnership between Imperial College London and three NHS Trusts, which aims to improve patient outcomes by harnessing scientific discoveries and translating them as quickly as possible into new diagnostics, devices and therapies, in the NHS and beyond. The researchers are working with Imperial Innovations, the College’s technology transfer partner, to spinout gripAble™ as a digital healthcare start-up to commercialise the device.

To find out more about plans for the company and the current gripAble™ clinical trial please contact Dr Paul Rinne on paul.rinne@imperial.ac.uk